Update: I have couplet for UK-Poland section. Atm 1-2 people can join from 14July in Poland / Lituania.
Slowly slowly I'm getting ready to Sail to Baltic Sea this summer. No fixed dates yet but mid June is most probabe date.
Crew welcome with or without experience. Preferably someone from Southampton area to help with a boat before departure.
Edit, 21st May: Plans getting more clear. Schedule will be as follows:
16th June, leaving to Channel Islands, most likely Alderley. Then Mont Saint Michel. Sailing around Channel Islands and French cat for few days(D Day landing beaches are my priority).
Sailing back to Southampton not later then 28th june(I have small thing to next day)
29/30June departing to Kiel canal (Germany). I'd like to do it in one go but it depend on crew an weather. This passage is typical costal cruise so we have many ports on the way. Portsmouth, Brighton, Eastbourne, Calais, Vissibgen, Hague, Den Helder, Brubsbuttel.
I've done this route before and I'm familiar with most of marinas on the way.
Once on the Baltic sea, Saling between dunish islands and then along the coast to Rugen Island, Polish coast, Baltic states, Aaland islands, Finland then along east coast of Sweden south.
This is just basic plan and I'm sure it will be modified often :)

Only members can leave reviews. Login or Sign up, it's FREE!

Andrew is a very talented Skipper. He has circumnavigated the United Kingdom and nothing seems to faze him. Can't recommend him highly enough and he is a nice bloke as well! 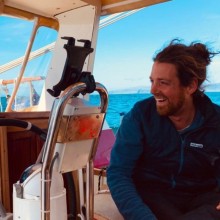 I have been guest sailing with Andrew from Southend-on-sea to the Channel Island. All in all it has been a beautiful sailing experience with fair winds and good sea; Andrew definitely is an experienced sailor and managed to steer the boat elegantly and with all the necessary calm in some tricky (and unfortunate!) events we faced. The structure/planning of the trip could be improved, as it was decided on the go (on the one side this gives space to adventure but on the other can clash with people's agenda/expectations). 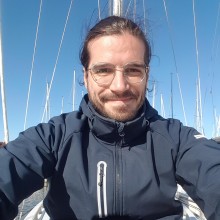 This URL has automatically been copied to your clipboard.